I headed out with my sweet little dog to Crosby Farm near the confluence of the Minnesota and Mississippi rivers for  a late winter walk.

Looking at plants in the winter can be really delightful. Most plants–annual and perennial, native and naturalized– die back to the ground completely in the fall but some plants leave behind a skeleton.  Knowing a plant through it’s whole lifecycle and being familiar with it’s winter form can be gratifying and enhances your plant id skills.

Crosby is a feral place.  It’s the site of farm that dates to the 1880s. In the 1960s it became a park.   Undisturbed pristine wilderness it is certainly not.  You can see the evidence of a land once used by people for something else but now reclaimed by the tough and tenacious trees, plants and animals.  There are broken bricks and evidence of old foundations.  There’s a mix of native plants and naturalized and sometimes invasive plants. If you visit, like me you might see deer, fox and eagles.  On a sunny fall days the snakes come out to warm themselves on the path.  There are developed features like paved trails and restrooms but there are also muddy, narrow little windy paths that traverse the hillside and wind through the floodplain.

Here’s a little messy, rustic, man made arch.  It’s like the doorway to the hillside trail.  Someone saw fit to mark the path in this way.  We passed through it on our way up the hillside path.

Here’s the dried winter form of Evening Primrose–the same plant that gives us Evening Primrose Oil. The supplemental oil you buy at the co-op is produced through an industrial process.  It would be an unthinkable amount of work to press the seeds of Evening Primrose foraged by hand.  The flowers are a sunny yellow and it’s quite tall.    The genus is Oenothera and there are several species in MN, all native.  In the garden these can be a bit pesky. The tap root is tenacious.  Think Burdock and you’ll have some idea of how hard it is to pull it up.

I saw the nesting pair of eagles for the first time since fall.  Their giant nest is high in the trees near the shoreline. One eagle stares down at me as we walk past. The other circles around the nest in gradually contracting circles until finally gracefully alighting in the nest.

I came upon some Bittersweet vine.  It was strung like a bower or ribbons or Christmas lights across the path.  It always feels like a treat to find Bittersweet. The scientific name is Celastrus scandens. This native vine produces beautiful fruit that persists through the winter.

When we emerged from the dirt path that follows the bluff we came upon the grove of Viburnum.  Here’s an image of the fruits of Viburnum trilobum, also known as High Bush Cranberry, shown side by side with the same species earlier in the season. This is our local variant of Cramp Bark and the bark can be harvested about now.  This is a fantastic uterine cramping remedy for menstrual cramps, pre-term labor and after pains.  It’s non-toxic and highly effective.

Upon entering the flood plain forest there’s bits of green here and there, mostly Motherwort, Celandine and Ground Ivy. These hardy non-natives will show their green faces anytime that the temperatures are mild enough.  I also encountered some Burdock. Notice the tiny barbs on the end of each little seed.  This Aster family plant is excellent at spreading itself by attaching seeds, actually hundreds of seeds at one time, to other animals passing by.  Burdock is an edge plant.  It’s not very common to find it deep in the forest, nor out in the middle of a meadow but it thrives along the margins, the edge of the woods, the edge of the field the edge of the lot.  The root is a delicious vegetable, commonly on the menu at Japanese restaurants. It’s like a carrot but earthier.  I like it pickled and I have also had it as secondary fermentation ingredient in kombucha where it is delightful.  It’s also a classic Western medicinal plant, one of the alteratives, also sometimes called blood cleansers in old time parlance.  Like all the alteratives there are dozens and dozens of recorded uses.  I like it for dry people with skin issues maybe acne, eczema, psoriasis or boils. It also enhances digestion, aids in constipation and is good for headaches. However, in order to be used most effectively the person taking it should be the dry constitution.

The tall, gracefully arching branches of the trees of the floodplain feel like a cathedral to me.  It’s dense and shady here in the summer.  Near the banks of the river there’s a bit more sun and here you find evidence of wildflowers, like Goldenrod, a member of  the Solidago genus. There are lots of species in MN. Everyone knows this plant when it’s in bloom in August. Flowering tops and the roots are used in herbal medicine. My favorite uses are childhood eczema and environmental allergies and UTI but there are lots of other uses as well.

Good old Common Milkweed (Asclepius syriaca) is beloved by the butterflies. It’s native, although can behave a bit like a pushy weed in the garden. I love these littles vessels bursting with silky seeds. The fresh latex sap taken from the leaves or stem when fresh is an old folk remedy for warts. 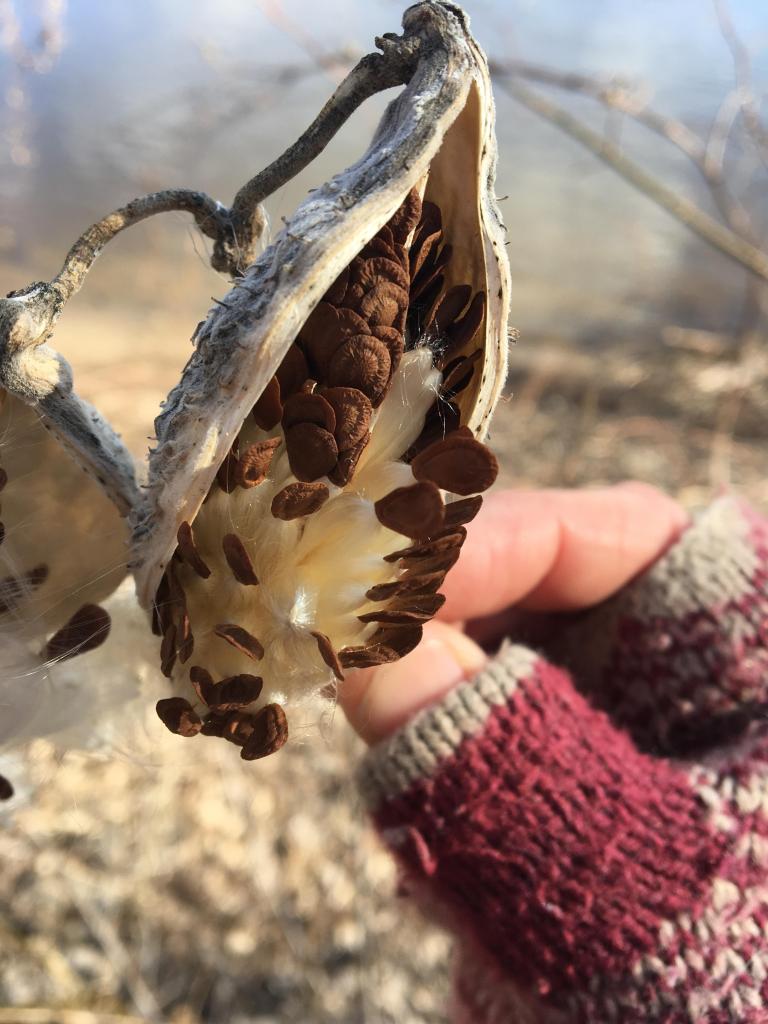 Throughout the wooded areas of Minneapolis, Saint Paul and the suburbs you will find rustic, primitive structures some are teepee-like. Some are lean-tos or little rounded huts.  There are archways and small bridges, even woven things and things hanging from trees. I often wonder about the people who build these things. I want to know why they build them.  I want to know how old they are and if they do this work alone.  This particular teepee-like structure at Crosby Farm is among the most impressive DIY structures I have seen in my wandering.

Nearing the end of our walk we were back at the meadow.  Lots of native prairie wildflowers leave behind a skeleton.  Here’s the dried seed head of Sweet Leaf/Wild Bergamont/Bee Balm. It’s a plant of many common names so I just call it by it’s scientific name, Monarda fistulosa. Notice the tubular seeds.  The nearby image is the flower earlier in the summer.  It has a distinctive, pungent aroma that smells very similar to oregano.  Even at the tail end of winter if you crush the seedhead between your fingers you can smell this unmistakable aroma.  This is a native mint of the prairie, meadow and sunny vacant lots. It’s a local anti-fungal, and great for UTI among many other uses.

Here and there were stalks of Blue Vervain. (Verbena hastata)  Of all the Vervains in Minnesota, this species in particular likes it’s feet wet. You will find it in ditches, alongside ponds or wetlands in wet fields.  Not only is this native wildflower beautiful but it’s a powerful medicine. It’s one of the most useful nervine anti-spasmodics and is used for tension at the base of the skull, the neck and upper back.  It’s relieves terrible menstrual cramps, the type that radiate down the leg and maybe involve cramping in the bowel and  for IBD/IBS and the cramping associated with that condition. It is an excellent nervine for hard-working, driven folks who are hard on themselves and feeling stressed out.  It is a wonderful PMS remedy when the style of PMS tends toward irritability.

Callie and I finished our walk. The shadows were beginning to lengthen. It was time for her post-walk treat.